CCM is the short form for Chinese Christian Mission, which was founded in 1961 in the U.S. Because Chinese people can be found in every corner of the globe, CCM offices were established in Taiwan, Hong Kong, the Philippines, Singapore and Australia in 1961, 1965, 1970, 1977 and 1993 respectively.

Entering the 80’s, in response to the explosion of the Chinese population in Canada, CCM Canada was established in 1981, based in Vancouver. Subsequently in 1992, 2000, and 2003, CCM Centres were established in Calgary, Vancouver and Montreal.

CCM Toronto Centre is one of six community services centre under the umbrella of CCM Canada. The Centre started providing services from May 5, 2007, offering a wide range of community services. The services of CCM Centre are planned and developed according to the needs of the community.

The staff of the CCM Toronto Centre seeks to live out the Christian faith by caring for the society’s well being. Its goal is to serve the people of the community holistically. The services are provided for children, parents, youth, adults, seniors, and for the groups of people with special needs such as new immigrants. Programs and services include: Supporting services for adults & families, counselling service, interest classes, workshops and seminars, concerts, children and youth activities, etc.

Connect With Us | 聯繫我們​

Have any questions or concerns?
Contact us and leave your email: 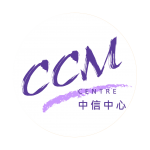